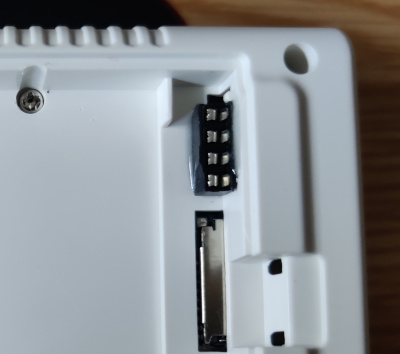 In this article we are going to see a modification of the Miyoo Mini emulation retro console to extract the UART port that exists on the PCB and thus be able to access it without opening the case. This UART port is also connected to a system terminal, which will help us a lot during the development or customization of the console system.

Before starting with the procedure, it should be noted that the modification is not simple. Being such a small machine, there is little space to pass cables or place the external connector.

To connect to the UART port just exposed, we use the typical UART-USB adapter. In my case I use this one which has quite a lot of possibilities. As client I use screen in Linux launched as follows since the port speed is 115200bps:

We will only use the GND, RX and TX pins, crossing the last two with those of the UART-USB adapter, that is to say wiring the RX of the device to the TX of the adapter and vice versa. Although we do not use the power supply line (2.8V in this device), we will configure the UART-USB adapter to 3.3V so that the signal levels that travel by RX/TX are as similar as possible.